With Stormblood’s ending being released I think it is time I write up about my experience with Stormblood but I do warn you – it is pretty much as bad as the ending of Stormblood. This will also be the last post on Life in Eorzea until Shadowbringers which hopefully will be a far different experience!

First I am going to talk about the setting of Stormblood. Stormblood was based in two different areas – one being the lands around Ala Mhigo and the other being around Doma and I feel this had an impact in a bad way with the story (I will go into that later). I will also toss in here as there is nowhere else to put it but I was a bit disappointed the formula of the game itself did not change.

The main story of Stormblood focused on finally feeling Ala Mhigo from the Empire while also doing it in Doma and a few other places to get some allies. In theory, this is not a bad idea but I felt Ala Mhigo was over in about an hour and that the main story very quickly forced us to Doma because that is where they actually wanted to make the expansion and not just tell us in the first place.

I would go as far to say that Stormblood should have happened after Shadowbringer as now it seems we will have a massive break between fighting the empire or even worst spilt it between the two and nothing will actually happen for a long time.

During the main story, we did meet some interesting characters and to be fair the parts with the Empire was interesting and it will be good to see just how far the empire will go and if they will follow the Ascians but the parts with “let’s restore Doma” was not that enjoying to me.

Overall to myself the story in 4.0 was, at best okay, with every single path until 4.5 simply being a filler with little to no actual development going on other than “the empire is being evil again”.

The trials in Stormblood was a bit of a mixture but mostly I found them to be lackbusting compared to Heavensward and it seems to be much easier this time around although do not get me wrong some fights was a heck of a lot of fun.

If I had to pick a favourite trial from Stormblood I would have to say it was Shinryu and that its extreme version was a brilliant example of how hard an extreme fight should be.

If I had to pick what I think is the worst extreme trial during Stormblood I would find it hard to pick a single trial of the Four Lords story. The trials themselves just felt like there was something missing and beyond the phase transitions, I can hardly remember anything the fights had to offer.

Overall I think the extreme trials were quite lacking and seem to have been “dumbed” down from how they were in Heavensward and it seems as the patches went on the fights just got more and more simple to the point the extreme trials felt like normal eight-man trials.

I must also comment that the mounts from these extreme trials were not as special as the ponies were but honestly, that is more of a personal taste.

For Stormblood the main raid tier was about Omega has its decides it needs to get even more powerful (for some reason) and decides the best way to do this is to look into history and fiction and create powerful warriors and then put them together so Omega can fight the winner … you hard that right its your typical battle gauntlet tier!

The fights themselves I am finding it quite hard to think which ones I actually enjoyed. I think o3s, o8s and o11s are the only ones I will remember and that is only because o3s had something interested with patterns, o8s had Kefka and o11s was finally against Omega.

The rest of the fights were pretty bad and not that interesting and beyond the phase transition for Ex-Death I felt this whole tier was pretty lazy and rather than write a story for Omega they decided to go full out fan service. The only thing missing was Sephiroth appearing at the end and saying Zenos was his long lost child.

One thing I was semi-impressed with (and annoyed about but I will get to this in detail a bit later) was some gear sets was amazing. The Genji gear of Striking is an actual amazing looking Samurai armour and the Diamond Fending and Healer set looks lovely with the Diamond set of Healing being used as my armoured raid vanity for my White Mage.

I am going to be quite biased here as I quite dislike the Tactics series but I felt the story was re-told quite badly and if you never knew about the original Tactics story you quite likely had no idea what was happening.

The fights of the alliance raids, however, were quite interesting and I found quite a few of them (such as Ultima) was far better than the savage raids themselves and makes me kinda happy we might see some of them return in an ultimate form (Ultima Ultimate anyone?) but overall they were fun to do and while I wouldn’t say do it for the story I would certainly recommend to do it for the fights themselves.

The gearsets themselves were not bad but I do feel they missed a chance to release the Final Fantasy Tactics job gear for each job (so in each chest you would have White Mage only drops, Black Mage etc) as the job designs from Tactics does look pretty cool (or the Advance version does).

Stormblood also added a new deep dungeon known as Heaven on High which was mostly the same as Palace of the Dead but with a few new features which are kinda interesting.

The rewards from the place is what you would expect but unlike Palace of the Dead, I had little drive to do the harder floors of Heaven on High and just had little interest in trying to clear it.

Still if you liked Palace of the Dead you likely liked Heavens on High.

The Forbidden Land of Eureka the single content in Stormblood that had the community divided so much. Eureka served as the relic content which was based on Final Fantasy XI’s end game but all it boiled down after you levelled was farming mobs for a FATE of another name to pop.

While some of these “NMs” were interesting, it seems as the later stages of Eureka came it just turned into your typical FATEs that just gets murdered in a couple of minutes.

The relics themselves were simply pick up a certain amount of crystals and then on the last step of each Eureka you had to get an item from the main NM which spawned under certain conditions.

Behind Eureka as well as the AF gear upgrades. In the first step of Eureka, it was used crystals to turn it into a dyeable version and then they just dropped it completely and bought out an Elemental Gearset which could be upgraded again. No second AF looks, no further AF upgrade 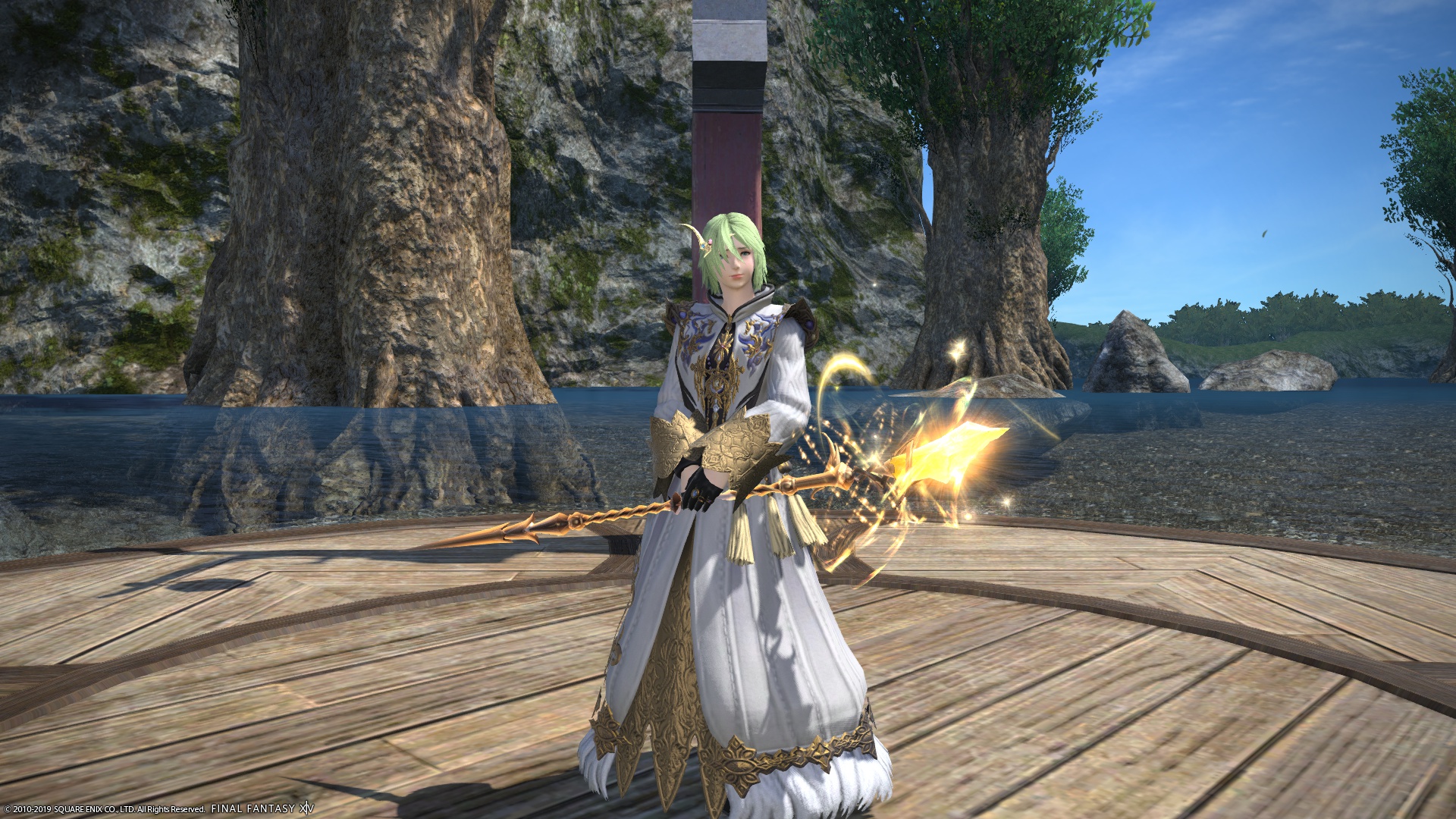 During Stormblood we had the release of Rival Wings. While many people don’t like it, I love the heck out of it and it is a shame it dies so quickly within the overall community.

Overall for the short period that Rival Wings actively popped and during the community effort to keep it alive – it was an overall saving grace for me and I hope a roulette come out for it as I would stay subscribed to play a few matches a week.

Honestly, I am not really able to comment much on housing as I am not such a fan as others but I love the fact mannequins are finally out (although limited badly by amount) but I was not impressed much by the gearsets released in Stormblood.

Most of the gearset was Asia based (I am simply not a fan of that design) or simply a re-skin of older gearsets. The level 63 set was pretty cool and I also love most of the Diamond gearsets so there are vanity sets I do believe I will be using long into Shadowbringer.

The only other thing I have to comment on about housing is the same issues still exist such as actually buying one if you want one but they did release mannequins which were one of the major things I wanted when housing came out and with any luck, we will see weapon racks soon!

I am not going to lie as I quite dislike beast tribes in Final Fantasy XIV other than the lore it provides but I felt none in Stormblood actually provided anything to the overall story and overall pretty dull.

With that said that is a personal choice there based on my own emotions so I could not count these paragraphs as anything as many people have enjoyed them and I am sure many will enjoy them in future.

Crafting did not change much in Stormblood but at least the quest provided you with all the items you need. I hoped that they would have changed it so role skills were not needed as much but this was another expansion where I did not bother much with crafting or gathering.

Gathering is the same above.

I will also toss in the rebuilding Doma here as it was “kinda crafting related” but I found it to be quite … disappointing. All you had to do was toss some items at it that you got over the week and Doma was rebuilt. The quests with them may have been enjoyable to people but to me I just hated the massive focus on only Doma.

I found Stormblood to be quite a meh expansion. The 24 man runs was fun, he Omega raids could have been far better and the trials were boring beyond Shinryu.

The dungeons themselves were not that bad but the main story was just Doma that, Doma this for something that was meant to be an Ala Mhigo expansion.

Red Mage was fun, Samurai was okay and the jobs I did play was alright.